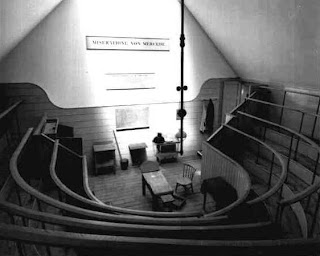 Mary perched on the step at the back of the room. She hugged her knees to her chest and shivered. Down below, a volunteer historian delivered a talk about 19th century surgery to gawping tourists. The woman paced around the low operating table, her plastic bangles clattering together with every movement. She held up a red block of carbolic soap to make the point that the operating theatre was in use well before an awareness of germ theory.
Mary watched the tourists. They sat on the high wooden steps where students would have once stood in this miniature amphitheatre of surgical education. Mary wondered at the ghoulish delight humans took in the suffering of others. The tourists gasped when the historian told them of the rivalry which led the surgeons to cut the operating time for a lithotomy to just forty five seconds.
The historian called for a volunteer from the audience, preferably a woman. Only women were operated on in this theatre, the men being confined to the other end of the hospital. A young man in a Ramones T-shirt and flip flops ignored the request and put himself forward. He walked down the steps and into the operating area. The historian bade him lie down, and “get comfortable” on the table. Mary grimaced. The operating table was far from comfortable.
The historian brought out an amputation case. She held up each of the knives for the audience’s inspection. The afternoon sunlight reflected on the blade of the Listen knife, sending a spike of light into Mary’s eyes. She hissed, and scuttled backwards to press her back against the wall.
The historian described the amputation procedure, drawing shudders and murmurs from the audience as she used her sleeve to demonstrate the folding back of skin. Mary’s hand explored her left knee, prodding her shin. She remembered the way the bone looked, thrusting out of her skin in an eruption of pus and blood. The doctor gave her the choice of gangrene, followed by death, or amputation, in all likelihood followed by death. She chose the latter, and death returned the lower leg removed in life.
Movement to her right caught Mary’s eye. She turned to see a Cavalier making himself comfortable beside her. He flashed a charming smile. Panic fluttered in her chest and she looked around for an escape route. Tourists blocked her way at every turn. The Cavalier laid a gloved hand on her arm and calm settled in her jittering stomach.
“Wh-wh-who are you?” she asked.
“Fowlis Westerby. At your service, ma’am,” replied the Cavalier.
“What are you doing here?”
“I was assigned a haunting at a pub along the street but I have concluded my business there. I thought I would drop by on my way back to HQ.”
“Assignment? HQ? I don’t know what you’re talking about,” said Mary. She decided the Cavalier had kind eyes, but she didn’t understand him.
“You have been on our list for some time, Mary. You have a fierce attachment to this place but, well there is no easy way to say this, but you need to let go.”
Mary looked away. She pointed to the back wall behind the operating table.
“The ward used to be through there. I died there, you know. I can’t go. These people…they need to know what it was like. I need to make sure that they know.”
“I know you do, Mary, but there is so much more that you could be doing! You must be ever so miserable, wandering around in the attic or listening to that woman droning on about a procedure you know all too well,” said Fowlis.
“Where else would I go?”
“Mary, try to remember the night you died. Did you see a woman you had never seen before? Long black hair, eyes full of stars?”
Mary thought of the hallucinations brought on by the ward fever. She’d seen lots of strange people around her bed that night. She grimaced to think of the red man with horns.
“She wanted to take you away from all the suffering, but you wouldn’t go. It was the middle of the cholera epidemic, and she had a lot of people to take that night so she could not stay. She was ever so distraught about having to leave you behind,” said the Cavalier.
“I think I remember her,” said Mary. “Her voice…it sounded like scraping metal.”
“Yes, it does take some getting used to, but she is a charming conversationalist all the same. I think you will like her,” said the Cavalier. “Come on, let’s go and meet her.”
The Cavalier held out his hand. Mary looked down at the tourists, now applauding the historian for the conclusion of the talk. She turned back to the smiling Cavalier. She placed her pale hand in his. The operating theatre dissolved from view, replaced by a small drawing room. Bookcases lined the wood-panelled walls, and a fire blazed in the hearth.
A woman with tousled black hair sat behind a desk. She smiled, revealing grey teeth and black gums. Mary suppressed the urge to shudder. The woman stood up and stretched out a white hand.
“Hello there, Mary,” she said. Her voice echoed with the silence of a ruined castle. “Welcome home.”