I haven’t really been doing much with my Fowlis blog, which is very remiss of me (and something for which I’ve received more than my share of reproach from the delightful Cavalier) and I’ve decided to start running a weekly feature, looking at British ghosts! After all, I’m working with a paranormal investigations company, and I’m researching the representation of haunted houses for my PhD, so it seems a fun thing to do.

For my first feature, I’ve decided to take a trip back to London, my former home for seven years, and have a look at the Black Nun of Bank… 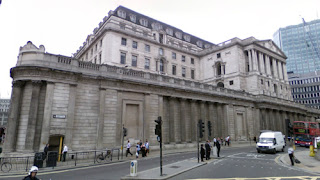 Nowadays, there is no crime in the United Kingdom that carries the death penalty, but during the 19th century, it appears that all manner of crimes could be punishable by death. In 1812, a former Bank of England employee named Philip Whitehead was hanged for forgery. That would be bad enough, but his sister Sarah was not informed, presumably to spare her feelings. One day, she arrived at the Bank and asked to speak to her brother, only to be told of his fate by a clerk ignorant of her identity. Sarah didn’t take the news particularly well, and she would visit the Bank every day, asking to see Philip. Sarah always dressed in black, and wore a black veil, earning her the nickname “The Black Nun”. If the clerks turned her away, she would accost customers instead, always asking for her brother. Eventually the Bank officials tired of her behaviour, and in 1818, they paid her to stay away. Reports suggest that she did so for the remainder of her life.

When Sarah died in 1840, she was buried in St Christopher-le-Stocks’ churchyard, which later became part of the Bank’s gardens. She was once seen pounding the gravestones with her fist in the churchyard, while she has also been sighted down in Bank underground station. One worker believed he’d spotted an old lady in the station, and given the early hours of the morning thought she’d been locked in, only for her to disappear down a corridor with no exit. Knocking has also been heard inside empty lifts after the station has been closed. Whenever Sarah is seen, she is still dressed in black, and still seeking her brother.

Now, Sarah has occasionally been referred to as the Old Lady of Threadneedle Street, but this in itself is actually incorrect – the title does in fact apply to the Bank itself.

The Bank of England has been located on Threadneedle Street since 1734. The street itself has been so named since 1598 – previously, it was part of Broad Street. The Bank was founded in 1694, during the reign of William III, making the Bank the first private national bank in the world.. War with France was draining William’s coffers, and two merchants agreed to found a national bank that could lend money to the Government. This money was to be used to finance the war, while the interest on the loan would be paid using taxes on alcohol and shipping.

But how did the Bank get its unusual nickname?

In 1797, James Gillray produced a satirical cartoon that portrayed the Bank as an old lady dressed in bank notes and sitting on a chest of gold, while William Pitt the Younger makes unwanted advances. A financial crisis was raging, and gold was not being used to back the issue of paper money. Titled “Political Ravishment, or the Old Lady of Threadneedle-Street in Danger!”, the cartoon is often believed to have been inspired by Richard Sheridan, Member of Parliament and playwright, who referred “to an elderly lady in the City of great credit and long standing who had made a faux pas” and “had unfortunately fallen into bad company”. Such a catchy name obviously stuck.

Personally, I prefer to refer to Sarah as the Old Lady. I’ve never seen her myself but if you ever find yourself in the area, and a woman in a black veil stops you to ask after her brother, at least now you know who she is!