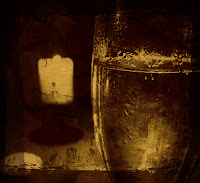 The clink of glasses and low hubbub of voices filled the drawing room. Roddy darted to and fro, proferring the bottle of champagne to the assembled guests. He turned to laugh at the tail end of a joke and saw Gloria by the sideboard, her mouth turned down in a frown. She held an empty glass and glowered at their friends. Roddy sidled across the room towards her.

“Why are they all here?” she asked.

“It’s New Year’s Eve! After that splendid party at the Glennister’s for Christmas, I simply had to have New Year’s here,” replied Roddy. He smiled and nodded to two passing blondes. He couldn’t remember their names but he knew they’d arrived with Doug. Roddy made a mental note to press for an introduction later.

“Why? Father wouldn’t be at all impressed.”

“Well Father isn’t here, is he? Besides, I thought it’d be nice to show the place off a bit.”

“It’s tasteless, and it’s insensitive. All that loss of life, and we’re swanning around drinking flat champagne!” Gloria glared at him.

“Oh do try not to be so dull, Gloria! The war has been over for over a year now. 1948 shall be simply marvellous!”

Roddy turned away from his sister and disappeared into the throng of guests. One of the blondes was waxing lyrical about the marble fireplace and he felt compelled to give her a tour of the whole house.

He and the blonde reached the door when he felt a hand on his arm. He turned to see Madeline gripping his sleeve, a gaggle of her fan club clustered behind her.

“Roddy, darling, I’ve told all of the girls about your lovely house, and they want to know if we’ll be able to see the ghost?” Her dazzling smile almost blinded him, and the simpering giggles of the fan club made his skin crawl.

“Oh but of course! She’s our star attraction. Look, Gloria here will tell you more about it!” Roddy tried to snag his sister’s arm as she stalked past.

“But it’s almost midnight.” Madeline held out her pale hand, gesturing to the diamond-studded watch hanging from her wrist. The fan club cooed their appreciation, and even the anonymous blonde at Roddy’s side gasped at the sight of such expense.

“Ah yes, Roddy, I do recall hearing your father talking about a ghost or some such nonsense. Care to enlighten us?” Doug appeared behind the fan club, his champagne glass in one hand, and the second blonde in the other.

“The house has a ghost?” The exclamation rippled through the guests as an approving murmur, and all eyes turned towards Roddy. He groaned, and threw open the door.

“Yes, it does, but to truly appreciate the story, we need to gather in the hall. Come along, this shan’t take long.” Roddy ushered the blonde into the entrance hall. Gloria slid past and directed guests to gather by the front door, better placed to gaze up at the magnificent staircase.

“Is everyone here? Can everyone see the stairs?” Roddy stood in the centre of the grand hall. The guests nodded.

“The story is simple, yet tragic. This house was built in 1812, and saw many a happy family reside within its walls. Yet in 1860, the house was home to the Redwing family. The patriarch had a beautiful daughter, named Elspeth. Unfortunately the patriarch also had a fondness for gambling, and he ran up extensive debts. One New Year’s Eve, some of those he owed decided to break in while the family were out at a party, and take what they pleased to cover the debts. Elspeth had stayed behind with a headache, and she heard them break in. She ran to the staircase, determined to rouse the servants, but tripped over her own nightgown and fell headlong down the stairs.”

“She broke her neck and died instantly, or so they say. It is said that every New Year’s Eve, on the stroke of midnight, she can be seen descending the stairs, and anyone to whom she speaks will be dead within the year.”

The prophecy prompted an outbreak of speculation among the guests, and feet shifted on the marble floor. Roddy laughed and shook his head. He tried to catch Gloria’s eye, expecting to see a reflection of his own merriment. Instead, she stood transfixed, staring at something on the first floor balcony. Was that whispering he could hear upstairs?

The figure stopped at the bottom of the stairs as the clock struck midnight. The guests stared, but Roddy glanced upward, convinced he’d seen a flash of white disappear around a corner. The house ghost wore a white nightgown, not a black cloak.

He looked back up at the figure. It threw back the hood and tossed the cloak backward in one fluid movement. A translucent Cavalier stood in the entrance hall, plumed hat held aloft in a gloved hand, the other hand extended in greeting. A collective gasp drew a breath of cold air into the hall.

The Cavalier vanished from sight before the echo of his booming voice finished reverberating inside the hall. Five minutes passed before any of the guests could raise a glass to the New Year.

Fowlis Westerby giggled in an upstairs bedroom with Elspeth Redwing.

“That’s the best New Year I’ve had in over eighty years!” Elspeth held her aching sides. Fowlis doffed his hat, and bowed.

“My pleasure, Elspeth. Hopefully I will see you soon, but for now, Happy New Year!”

Happy New Year from myself and Fowlis Westerby!